Now, where were we?  Oh yes, Pear Tree Park & Ride in Oxford.  From there we headed south to The New Forest area, which we love. I love the wild horses in the New Forest.  After seeing them running free, I hate to see horses all trussed up and saddled up with a great fat bottom on top controlling where they go and what they do.  (Just saying how it is near us with the horsey people - quite a lot of Hugh Jarses).

Before going to our hotel, we stopped off at Lyndhurst for lunch and for Roberto to drool over the Maseratis on display at the dealership which is right next to the Mailman's Arms pub. For a one street town, Lyndhurst is always busy and there's always something going on.  While we were there, a group of hot rods came through for the hot rod festival at Beaulieu, which we went to on the Sunday. 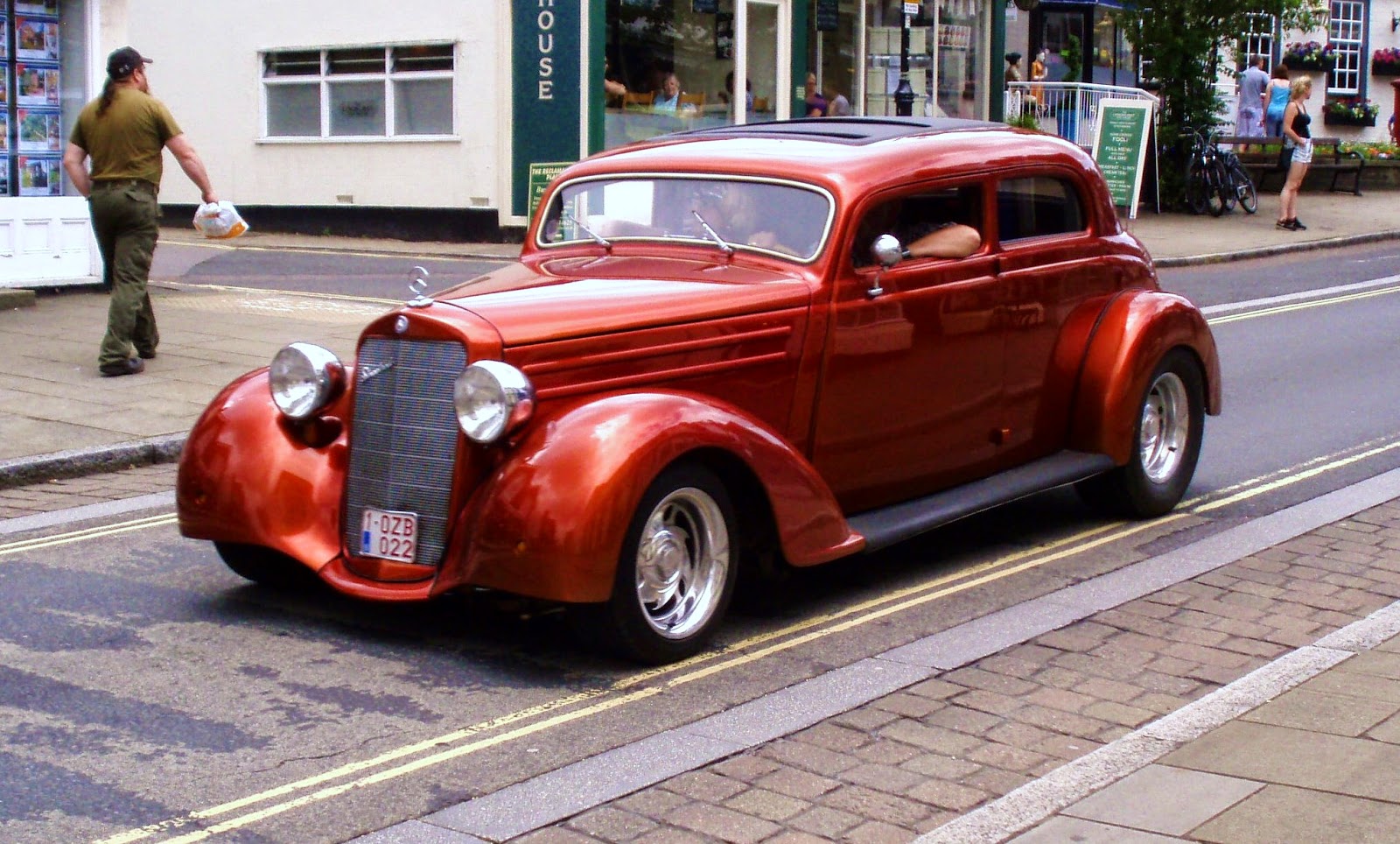 As soon as we arrived at the Beach House Hotel at Milford-on-Sea, I just loved it. It reminded me of Gull's Point from one of the Miss Marple stories, and funnily enough (some might say spookily) when I switched on the TV later on, that very same episode was on.  A lot of the original features in the Beach House have been kept, like the oak panelling throughout the hallways and dining rooms and a lot of the old squashy leather chairs and sofas.  Every room has recently been re-vamped and ours was absolutely lovely, not like a normal hotel room at all but like a very comfortable bedroom in a beautiful house.  From our room we heard an argument later on at night in the kitchen with the German manager,  and one of the chefs.  We heard a lot of clattering and banging around and then we heard her say, "You veel obey me!" Don't know what that was all about but it gave us a laugh anyway.
We went to the very popular Saturday market at Lymington.  It runs the whole length of the main street on both sides.  We discovered the old cobbled back streets that go towards the marina and we had a wander round.  I don't know who these people are in the photo but we must have been caught up in thousands of Japanese tourists' photos while we were down south. Can you imagine the folks back home?  "Who those people in photo?  Why they in evely photo?"
I will skip over Beaulieu Museum.  Although it is lovely to visit, we have been there three times and there's only so many times I can look at the James Bond/Formula 1 cars etc. I liked the hot rod festival though. 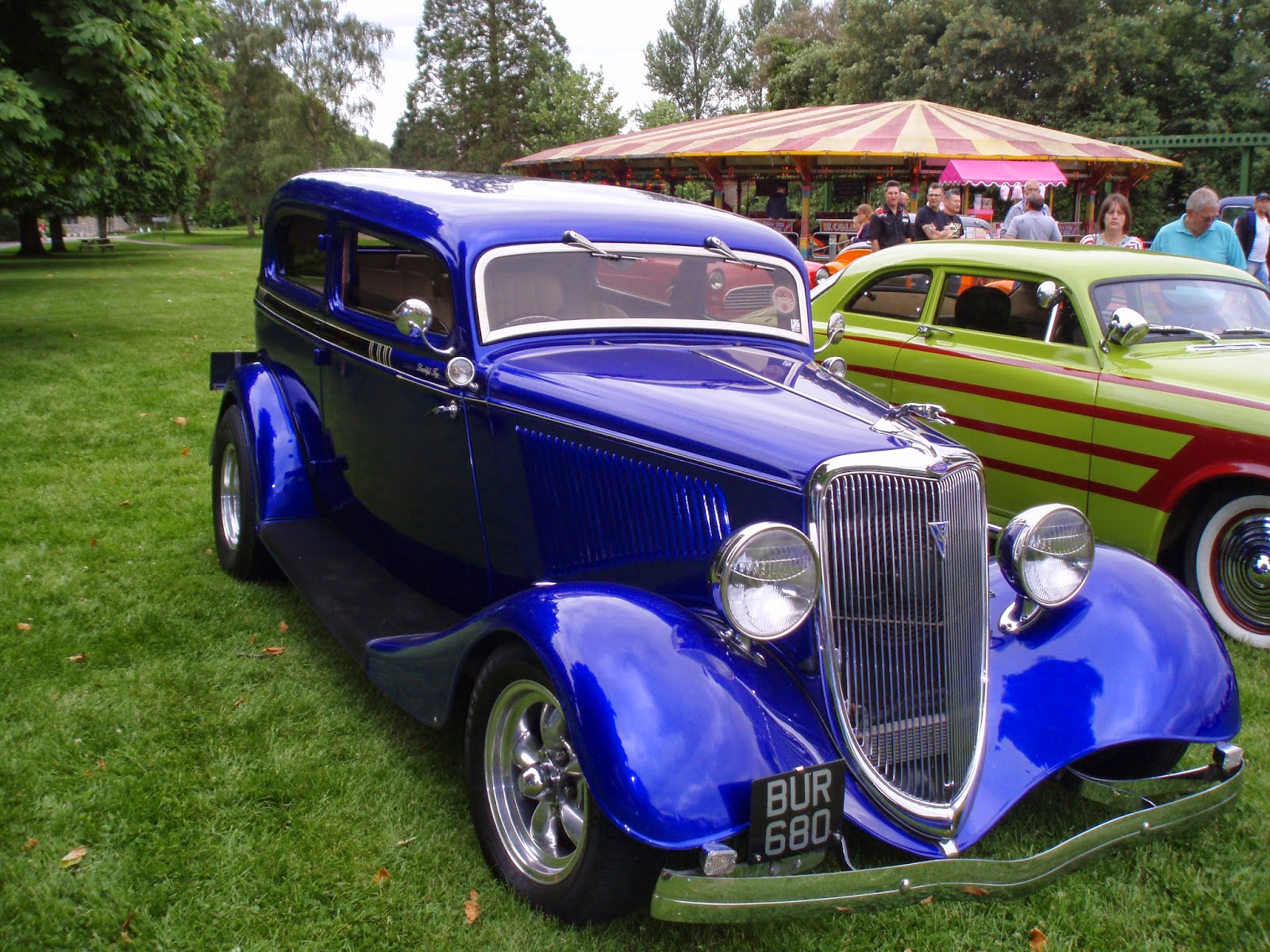 On the Sunday night we stayed at a de Vere hotel in Abingdon, Oxfordshire.  They do a really good deal on Sunday nights - double room  for £39.  The rooms are quite small but very clean and modern and tastefully decorated.  We were a couple of stingypants and didn't want to pay £10 each for breakfast (I didn't want a big fried breakfast anyway) so we decided we would find a nice village in the Cotswolds on the way up and stop off. As it happened we passed a brand new American Diner called Cherry Pie Diner in Faringdon.  We were so pleased to find it. The waitresses were all dressed in 1950s style skirts with flat shoes and bobby socks and hair tied back in pony tails.  They music was the Everly Brothers on a loop.  It was like stepping onto the film set of Grease.  The breakfast was really good and the service was excellent.  It's nice when a plan comes together isn't it?
Next stop, Stratford Upon Avon Park & Ride. It was easier than finding a car park and the town was only a 5 minute ride from the bus stop. I'm not really that interested in Shakespeare and I must admit I only went to see The Merchant of Venice years ago at the theatre because Dustin Hoffman played Shylock in it. Actually, I quite enjoyed it. Anyway, we did a tour of the town and walked down to the river to watch the riverboats, bumping into a couple we know from our village along the way.  It was just a bit too busy for me and there were millions and millions and millions of Japanese tourists.
There are so many great places to visit in the UK. We're looking forward to planning our next little trip.
See you soon, mes amis.
﻿
﻿
at 14:11 6 comments:

A Little Trip Down South

Funny things always happen to us when we go away for a few days.  In a lovely old pub in Burford in the Cotswolds,  Roberto was asked by an attractive young barmaid if he wanted a Full Brazilian.  Once we had stopped laughing, he ordered a pint of it.

There were hundreds of Japanese tourists in the area when we recently visited.  I knew they liked taking photos but I couldn't believe it when I saw several of them taking photos of the parking ticket machine in the car park in Bourton-on-the-Water ("Velly intellesting machine").  In another car park I saw a man taking a little powered mono-wheel thing out of his boot to use to scoot over to the parking ticket machine and then back to his car. If I had done that, I would have fallen on my a**e. Velly funny.

Then there was the odd newsagent.  We went into a newsagent shop to get Roberto his cigarettes.  It was one of those occasions when I got a bit freaked out and wanted to run.  Roberto asked for his usual brand and we noticed that there were no cigarettes behind the counter. In fact, the whole shop looked a bit bare. The owner turned round to a kind of metal cupboard that turned out to be a cigarette machine.  He told us that he had to take the money out of the till, put it in the machine, press some buttons and then when the cigarettes came out, he scanned them on the till and we paid the money.  I really wanted to run.  It was all a bit odd and velly strange.

On another day we got on the Park & Ride bus to go into Oxford.  We clambered up to the top deck and sat down.  We had visited last year as well.  There was a young woman already on the top deck, dressed in a black skirt and red blouse.  That same young woman had been there on the top deck the year before when we visited, wearing the same outfit, I swear to God. Anyway, she was on the phone, apparently to a locksmith, asking him to come and fix the lock on her back door.  She then proceeded to tell anyone who had ears to hear her name, address, post code, visa number etc etc.  Velly Silly.

One final question before I go.  If England football players get paid up to £300,000 A WEEK  (yes, you heard that right - A WEEK),  why aren't they winning matches at the World Cup? Full Brazilians all round I think.


More soon.  We went to the New Forest as well.

I had the misfortune to spend some time in Goole the other day.  Roberto wanted to get the car checked and his aircon re-whatsit-ed so we took it to Kwik Fit in Goole, only because it's easier to park there than at the Beverley one.
Everything in Goole looks grey and the main shopping street is full of tat shops, charity shops, sell your granny for cash shops.  It is, mes chers amis, quite depressing to walk through. There are very few recognisable high street shops and the few that were there looked extremely drab and grey and very uninviting. Even the people looked grey and depressed. It was like a scene from the early '80s recession.
We decided to kill some time and go to the Tesco coffee shop (yes, we were that desperate). The café itself looked quite dirty and tables hadn't been cleared away or wiped.  We picked up a couple of sandwiches and filled up two mini tea pots for a cup of tea.  Doris, who was serving, immediately decided to go into the back and start washing dishes, so we waited and waited.  There was another lady making a toasted sandwich for someone so I asked her politely if anyone was serving.  She said "just a minute, loove" and went in search of Doris.  Neither lady was seen again.  We walked out.
Fortunately we found a nice bakery/café across the road with very pleasant ladies serving.  They were the first people I had seen smiling since I arrived in Goole.  We both felt quite down on the way home.  It really was that bad.
Anyway, depression over and excitement is taking over.  We are off on our travels for a few days down south.  We will be starting at Burford in the Cotswolds, visiting Oxford from there and then going further down to the New Forest. Can't wait!
Missing you madly already, mes amis.  Squeak soon.
at 19:21 10 comments:

Molly Printemps
Brough, East Yorkshire, United Kingdom
I am originally from Glasgow and have been living in sunny East Yorkshire for over 20 years. Thanks for dropping in. I'll get Heathcliff to put the kettle on and we'll have a nice natter. I enjoy reading your comments so don't be shy.